What is Reminiscence Therapy? 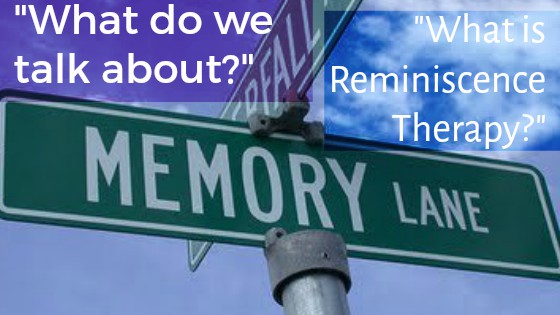 What is Reminiscence Therapy? – Caroline Dawson

“What should I talk to my loved one about?”

They ask if they should tell them this or that bit of news.

“Will they be worried, or interested? If I don’t tell them something won’t they feel left out?”

As our clients and loved ones progress through the phases of dementia it can feel difficult at times to figure out how to best engage with them on their terms. Reminiscence offers a solution for any phase.

What is Reminiscence Therapy?

Reminiscence Therapy (RT) involves the discussion of past activities, events and experiences with another person or group of people, usually with the aid of tangible prompts such as photographs, household and other familiar items from the past, music and archive sound recordings. (This definition comes from an article from the National Institutes of Health)

Reminiscence prompts take your client and loved one back in time. Back to when their memories may be clearer and timelines and details make more sense. They may even experience a sense of relief talking about topics in their far past – like a mini mental vacation away from the not time oriented now.

But, the question remains – “What do we talk about?”

The point of this kind of communication is to go back in time. Choose topics you anticipate will prompt positive memories. If there is a time period you know holds positive memories, deliberately ask about that time frame.

It’s summertime and topics are ripe for the picking:

In March I shared:  Finding a Common Language Through Poetry  and talked about why poetry lingers even in the memories of those with symptoms of dementia.

Here in Kansas City – the Royals are on a roll again in 2016!  So, in honor of the first day of summer and our own hometown team, here’s a favorite baseball poem to read aloud to your loved one. (Who may be able to recite along with you!) Casey at the Bat!

OR Enjoy this 1946 Musical Recitation from Disney together:

Casey at the Bat

The outlook wasn’t brilliant for the Mudville nine that day:
The score stood four to two, with but one inning more to play,
And then when Cooney died at first, and Barrows did the same,
A pall-like silence fell upon the patrons of the game.

A straggling few got up to go in deep despair. The rest
Clung to the hope which springs eternal in the human breast;
They thought, “If only Casey could but get a whack at that—
We’d put up even money now, with Casey at the bat.”

But Flynn preceded Casey, as did also Jimmy Blake,
And the former was a hoodoo, while the latter was a cake;
So upon that stricken multitude grim melancholy sat,
For there seemed but little chance of Casey getting to the bat.

But Flynn let drive a single, to the wonderment of all,
And Blake, the much despisèd, tore the cover off the ball;
And when the dust had lifted, and men saw what had occurred,
There was Jimmy safe at second and Flynn a-hugging third.

Then from five thousand throats and more there rose a lusty yell;
It rumbled through the valley, it rattled in the dell;
It pounded on the mountain and recoiled upon the flat,
For Casey, mighty Casey, was advancing to the bat.

There was ease in Casey’s manner as he stepped into his place;
There was pride in Casey’s bearing and a smile lit Casey’s face.
And when, responding to the cheers, he lightly doffed his hat,
No stranger in the crowd could doubt ‘twas Casey at the bat.

Ten thousand eyes were on him as he rubbed his hands with dirt;
Five thousand tongues applauded when he wiped them on his shirt;
Then while the writhing pitcher ground the ball into his hip,
Defiance flashed in Casey’s eye, a sneer curled Casey’s lip.

And now the leather-covered sphere came hurtling through the air,
And Casey stood a-watching it in haughty grandeur there.
Close by the sturdy batsman the ball unheeded sped—
“That ain’t my style,” said Casey. “Strike one!” the umpire said.

From the benches, black with people, there went up a muffled roar,
Like the beating of the storm-waves on a stern and distant shore;
“Kill him! Kill the umpire!” shouted someone on the stand;
And it’s likely they’d have killed him had not Casey raised his hand.

With a smile of Christian charity great Casey’s visage shone;
He stilled the rising tumult; he bade the game go on;
He signaled to the pitcher, and once more the dun sphere flew;
But Casey still ignored it and the umpire said, “Strike two!”

“Fraud!” cried the maddened thousands, and echo answered “Fraud!”
But one scornful look from Casey and the audience was awed.
They saw his face grow stern and cold, they saw his muscles strain,
And they knew that Casey wouldn’t let that ball go by again.

The sneer is gone from Casey’s lip, his teeth are clenched in hate,
He pounds with cruel violence his bat upon the plate;
And now the pitcher holds the ball, and now he lets it go,
And now the air is shattered by the force of Casey’s blow.

Oh, somewhere in this favoured land the sun is shining bright,
The band is playing somewhere, and somewhere hearts are light;
And somewhere men are laughing, and somewhere children shout,
But there is no joy in Mudville—mighty Casey has struck out.

(This poem is in the public domain)

Fear not about striking out with your loved one and client!

Even if your reminiscing prompt brings up a negative memory, you can give them a gift of comfort by validating their feelings. Using reminiscence and validation mean we as caregivers are meeting our loved ones and clients where they are and are communicating on their terms. They are losing (or have lost) the ability to access recent memories. Using this tool is a way of speaking the language they are comfortable with – the past, rather than forcing them to speak our language of the present.

Providing professional services for seniors and families facing challenges due to aging, declining health, cognitive impairment, or a medical diagnosis in the Kansas City metro area and Lawrence, Kansas.